You may have heard of the English nursery rhyme that starts with the classic line ‘Remember, remember the fifth of November.’ The dramatic story behind this rhyme continues to inspire British citizens to celebrate the 5th November, or Guy Fawkes Night, every year with fireworks and bonfires.

So who was Guy Fawkes and what is the real story behind Guy Fawkes Night?

Guy Fawkes, born in 1570 in York, England, converted to Catholicism at an early age and used his military career to spread Catholicism throughout Europe. By 1604, Fawkes had fought for Catholic Spain in the Eighty Years‘ War against Protestant Dutch reformers in the Low Countries and had unsuccessfully attempted to seek support for a Catholic rebellion in England. In 1604 Fawkes become involved in what became known as the Gunpowder Plot. Lead by a group of English Catholics, the Gunpowder Plot was a plan to blow up the House of Lords during the State Opening of Parliament on 5 November 1605, in an attempt to assassinate King James I, the Protestant King, and install his nine-year-old daughter, Elizabeth, as the Catholic head of state.

Luckily for the British government and monarchy, the plot was revealed to authorities in an anonymous letter only a week before the plot was set to take place. On the evening of 4 November 1605, a day before the plot was set to take place, Fawkes was discovered guarding 36 barrels of gunpowder, enough to completely destroy the House of Lords. Although Fawkes was merely a co-conspirator and not the leader of the plot, he has become the central figure used to commemorate the thwarted Gunpowder Plot.

For the past four centuries on Guy Fawkes Night, now known as Bonfire Night, British citizens have lit bonfires, let off fireworks and burned effigies of Guy Fawkes to celebrate the plot’s failure. Usually bonfire celebrations will include a ‘Guy,’ or a doll, which represents the traitor, Guy Fawkes, accompanied by sparklers and firework displays. Although it is usually illegal for Brits to set off fireworks between 11pm and 7am, on Bonfire Night the cutoff is 12 midnight! 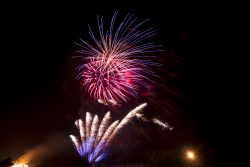 Although the tradition of Bonfire Night is still going strong today, its popularity has waned throughout points in history, such as the first half of the 19th century in which historians observed ‘a lessening of Protestant religious zeal’ in part due to the expansion of Catholic civil rights in the United Kingdom. Gunpowder Treason Day, as it has become known in other countries, has been exported by settlers to other members of the Commonwealth of Nations such as Australia, New Zealand, Canada and various Caribbean nations.

You can adjust all of your cookie settings by navigating the tabs on the left hand side.