It is small and red. It is worn on 11 November every year across Britain and other English-speaking countries, and has been a tradition since the end of the First World War. It’s called a poppy, but what is the actual meaning behind this flower?

Since 1920, this day has been a national day of remembrance in the British Empire. On Remembrance Day, Armistice Day or Poppy Day (as the day is variously called), which is comparable to the German Memorial Day, the small, red poppy is worn to remember and respect the fallen of the two great world wars.

In the weeks before the day of remembrance, artificial poppies are made and sold everywhere by The Royal British Legion, a charity dedicated to war veterans, and the flower was chosen because scores of them flowered in the former battlefields of Belgium and northern France.  However, it is thought the poppy connection to remembrance goes back to the Napoleonic wars.

A Canadian officer, John McCrae, wrote a poem in 1915 in memory of his best friend who lost his life.  The famous poem “In Flanders Fields” reminds everyone of the fields soaked with the blood of the soldiers.

In Flanders fields the poppies blow

Between the crosses, row on row,

That mark our place; and in the sky

Scarce heard amid the guns below.

We are the Dead. Short days ago

Loved and were loved, and now we lie,

Take up our quarrel with the foe:

To you from failing hands we throw

The torch; be yours to hold it high.

If ye break faith with us who die

We shall not sleep, though poppies grow

In England, a two-minute silence is held at 11 a.m. every 11 November and in many cities a cannon shot is fired beforehand. Radios fall silent during this time and employees also take part in the silence. 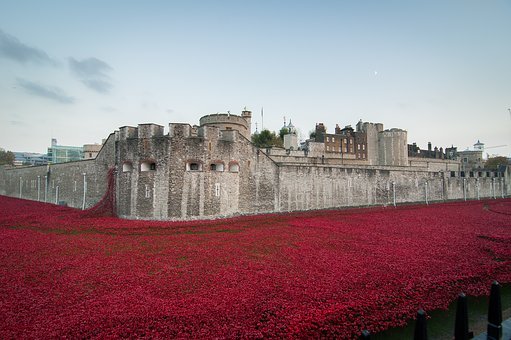 In 2014 888,246 poppies formed a public installtion in thereat of The Tower of London

In 2014, 888,246 ceramic poppies, each intended to commemorate a serviceman who was killed, formed a public installation in the moat of The Tower of London.  This commemorated 100 years since the outbreak of World War 1.  It was entitled “Blood Swept Lands and Seas of Red”.

“The Last Post” played around England to commemorate Remembrance Day

You can find out more about which cookies we are using or switch them off in settings.

Strictly Necessary Cookie should be enabled at all times so that we can save your preferences for cookie settings.

If you disable this cookie, we will not be able to save your preferences. This means that every time you visit this website you will need to enable or disable cookies again.